The National British Women’s Temperance Association (NBWTA), for example, is given more attention by researchers and historians. Its counterpart, the Women’s Total Abstinence Union (WTAU) is often seen as being of lesser importance, narrow-minded and conservative for its time. (The NBWTA and the WTAU were formed in 1893 when members of the British Women’s Temperance Association could not agree on expanding their work to encompass a wide variety of social issues. The WTAU continued to focus on temperance work; the NBWTA diversified to include work for suffrage and on other social and political issues.)

The NBWTA had charismatic leaders with connections in the press (their president owned newspapers she could use for her own editorials, for example) – they could spread their side of the story. And even decades later, White Ribbon histories of their own organisation side-lined the WTAU, adopting the view that they were anti-progress, and paying less attention to their work. Additionally, Lady Henry Somerset, the president of the NBWTA from 1893 – 1903, and her friend and American counterpart, Frances Willard, were somewhat idolised by the British and international White Ribbon movements.

Other, less glamourous, individuals and organisations (including the WTAU) had much less attention paid to them; the mythos of Lady Henry and the progressive NBWTA therefore grew, and was paid more attention, and so continued to grow. Lady Elizabeth Biddulph was involved with the BWTA from its early days and went onto become President of the Women’s Total Abstinence Union (WTAU) from 1896 to 1898.

Biddulph came to temperance work later in life. She was born in 1834, the eldest daughter of the fourth Earl of Hardwicke, and grew up in Cambridgeshire. The temperance movement was just coming into existence at this time, so she would have been unaware of temperance principles altogether. A friend wrote about Lady Biddulph’s first season in London, in comparison to her quieter life in Cambridgeshire:

“Thus London with its many attractions suddenly burst upon the impressionable mind of the young girl, bringing her new avenues of interest and delight when she was best able to appreciate them. Music and song, political and other society, with much stimulating and brilliant conversation, made the year of her debut a very fascinating one.”

The young Lady Biddulph was established at the top of society. She was friends with the Duchess of Teck (mother of Queen Mary), Empress Eugenie and relations to the court of Napoleon III. She also worked with the poor in Bethnal Green, London.

Despite being “proud to call herself an ardent Tory” as a young girl, she married Henry John Adeane Esq, a Liberal MP for Cambridgeshire. She was said to have gradually adopted Liberal principles and supported Liberal measures, and later identified herself as a Liberal Unionist. They had three children, two daughters and a son. Adeane died in 1870 after a long illness, leaving her widowed and raising three children while she was still in her 30s. 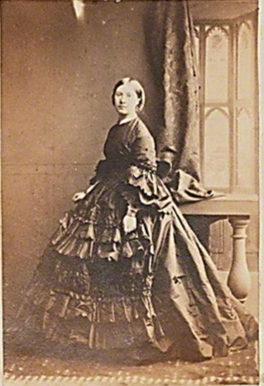 Biddulph was fairly soon thereafter appointed to Queen Victoria’s household as one of her Women of the Bedchamber. Many of her family had held or were at that time holding royal posts. Lady Biddulph left the service of Queen Victoria upon her second marriage to Michael Biddulph, Liberal MP for South Herefordshire, who had four children of his own. Lady Biddulph’s eldest daughter, Marie, became Maid of Honour and later Secretary to the Queen.

After her first husband’s death, Lady Biddulph also returned to the charity work of her youth, managing a small mission in East London and running thrift (savings) clubs for poor women.

Her interest in the temperance cause began when she moved to Ledbury after her marriage to Mr Biddulph. At first, Lady Biddulph was satisfied with making charitable contributions but she soon became “puzzled to know how to relieve the poor without contributing to drunkenness”.

Lady Henry Somerset, the later president of the NBWTA and instigator of the split in the BWTA, was brought to temperance by Lady Biddulph (somewhat ironically, given their later disagreements over temperance work). Lady Somerset signed the pledge two years after Lady Biddulph, and would sometimes refer to her as “my Temperance godmother”.

“Sometime after I had taken the pledge and began to work I felt I wished for some society where I could become associated with friends agreeing on this one social reformation – a perfectly neutral platform – and this I found at the Memorial Hall [London offices] in the BWTA.”

She was additionally a member of the Rechabites, the Church of England Temperance Society at Hereford and Gloucester and the Ledbury Temperance Union.

During the 1880s, the BWTA opened a Temperance Home, a residence for the rehabilitation of women who were addicted to alcohol. The Home served women from all walks of life, and funds were raised to pay the costs for poorer women. Lady Biddulph was President of the Home Committee, and helped run and raise funds for it.

In 1890, Biddulph’s friend Lady Henry Somerset was elected president of the BWTA. Within a couple of years, Somerset was advocating for the BWTA to “do everything” – not just work for the temperance cause, but all other social and political causes that affected women.

Eventually, the tension brought about by conflicts between supporters and opposition to this policy caused the BWTA to split into the NBWTA and the WTAU.

Lady Biddulph was interviewed about her views on broadening the scope of the BWTA just a few months before the split took place:

“My opinion is that you cannot have any other question outside it until this reform [temperance] is carried out. It must be entire and total union to carry this great reform. I disapprove of any other matter being brought forward in our Association. We are banded together for one purpose. Our politics and creeds are varied, and total abstinence is the one and only principle which connects us together. We cannot admit any other, or we shall split.”

Despite this seeming hard line on temperance, Lady Biddulph was much more liberal in other ways. She publicly stated that she had no violent feelings about moderate drinkers (although she didn’t think a temperance society could promote moderation as it was confusing). She also did not support total prohibition (complete banning of alcohol by the government) of the sort being brought in by some American states and was cognisant that some temperance campaigns would not garner widespread support. She thought it was better to campaign about sacrament wine (using grape juice instead of alcohol) quietly, for example, as she said the general public found it off putting.

Biddulph was a “strong believer in helping people help themselves”. In practical terms, her charity work – she did not restrict her work just to those who would sign the pledge – included running thrift clubs (collecting savings for the poor and adding bonuses), particularly in Ledbury and East London; holding meetings for poor women; heading up the Ledbury branch of the BWTA/WTAU; circulating a lending library in Ledbury; campaigning for nurses for the poor; and continuing to support the East London mission she had worked with. She was interested in many subjects of social reform and “acquired a great power of public speech”.

Lady Biddulph was one of many BWTA who split to form the WTAU in 1893. She was the WTAU’s second president, from 1896 to 1898 and continued to be president of the Ledbury branch for many years.

Under her guidance, many branches of the WTAU set up thrift clubs in their local areas all over the country. She thought it was of the utmost importance that the poor, particularly women, be able to have some control over their money, including being able to keep it from being spent on alcohol.

After her presidency, Lady Biddulph continued to work and advocate for the WTAU and the other social issues dear to her. As the years passed, Lady Biddulph grew more frail. She died in 1916 at the age of 81, having been “infirm and somewhat helpless with age” for several years. She was remembered as a generous and warm friend by many, and sorely missed by the WTAU and all those she had helped.